Disclaimer: MicroRaft is a project I develop in my free time. It is not affiliated, associated, endorsed by, or in any way officially connected with my current employer Facebook, or any of its subsidiaries or its affiliates.

I am pleased to announce the first public release of MicroRaft! MicroRaft is an open-source implementation of the Raft consensus algorithm in Java. You can use MicroRaft to build highly available and strongly consistent data, metadata and coordination services. The source code is available at Github with the Apache 2 License.

MicroRaft is a complete implementation of the Raft consensus algorithm. It implements the leader election, log replication, log compaction (snapshotting), and cluster membership change components. Additionally, it realizes a rich set of optimizations and enhancements to allow developers to run Raft clusters in a reliable and performant manner, and tune its behaviour based on their needs.

MicroRaft works on top of a minimalistic and modular design. It is a single lightweight JAR with a few hundred KBs of size and only a logging dependency. It contains an isolated implementation of the Raft consensus algorithm, and a set of accompanying interfaces to run the algorithm in a multi-threaded and distributed environment. These interfaces surround the Raft consensus algorithm, and abstract away the concerns of persistence, thread-safety, serialization, networking and actual state machine logic. Developers are required to implement these interfaces to build CP distributed systems on top of MicroRaft.

You can use MicroRaft to build highly available and strongly consistent data, metadata and coordination services. Here are some common examples:

The following figure depicts MicroRaft's main abstractions. RaftNode runs the Raft consensus algorithm with the Actor model. Clients talk to the leader RaftNode in order to replicate their operations. They can talk to either the leader or follower RaftNodes to run queries with different consistency guarantees. RaftNode uses RaftModelFactory to create Raft log entries, snapshot entries, and Raft RPC request and response objects. These objects are defined under an interface, RaftModel, so that developers can implement them using their favorite serialization framework, such as Protocol Buffers, Avro, or Thrift. Each RaftNode talks to its own Transport object to communicate with the other RaftNodes. For instance, if the RaftModel interfaces are implemented with Protocol buffers, a Transport implementation can internally use gRPC to communicate with the other RaftNodes. RaftNode also uses RaftStore to persist Raft log entries and StateMachine snapshots to stable storage. StateMachine enables users to implement arbitrary services, such as an atomic register or a key-value store, and execute operations on them. If it is a key-value store, then clients can replicate operations like get, set, delete, etc. Once a log entry is committed, i.e, successfully replicated to the majority of the Raft group, the operation it contains is passed to StateMachine for execution and the leader RaftNode returns the output of the execution to the client. 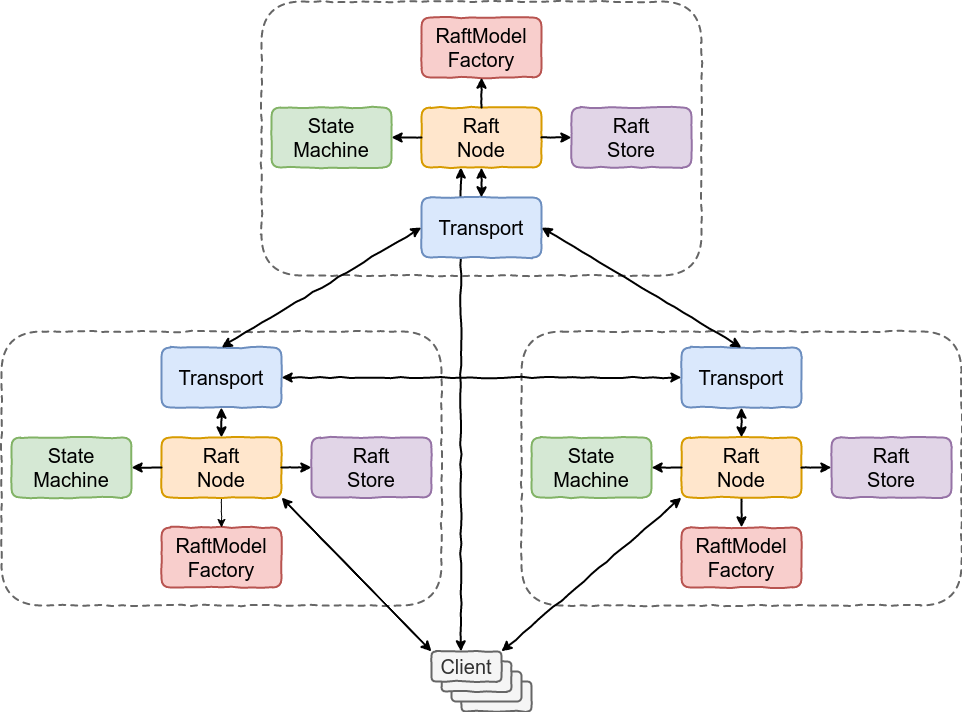 Run the following command on your terminal for a sneak peek at MicroRaft. It starts a 3-node local Raft group (a Raft cluster in MicroRaft terms), elects a leader, and commits a number of operations.

Follow the tutorial to learn how to build an atomic register on top of MicroRaft and for full details, check out MicroRaft's APIs and main abstractions.

I couldn't have brought MicroRaft into the daylight without the power of open source. MicroRaft originates from the Raft implementation that powers Hazelcast IMDG's CP Subsystem module. I was one of the main contributors of the CP Subsystem and was thinking about converting its Raft code into a separate library back in 2019, but didn't have the time to try my idea before leaving Hazelcast in February 2020. I decided to give this project a try to amuse myself during the lockdown while I was still in Turkey. After I relocated to London, I was too busy with everything related to starting a new life and a new job in a new country, so I needed a whole year to find some free time and make the project ready for release.

Mehmet Dogan and I developed the original Raft code inside Hazelcast codebase, but we isolated it from the rest of the Hazelcast code. It depends on Hazelcast for networking, logging and testing. So I started by moving out the Raft code and defining abstractions for the parts depending on Hazelcast. Then I implemented several significant enhancements and improvements that you can see at the commit history.

MicroRaft proudly carries on Hazelcast's open-source heritage and is released with the Apache 2 License.

I wrote down a list of future work on MicroRaft. I am planning to work on them in my free time. The list is tentative and there is nothing urgent at the moment.

MicroRaft is a new open source project. Any kind of contribution and feedback is welcome! The development happens on Github. Last, you can follow @MicroRaft on Twitter for announcements.